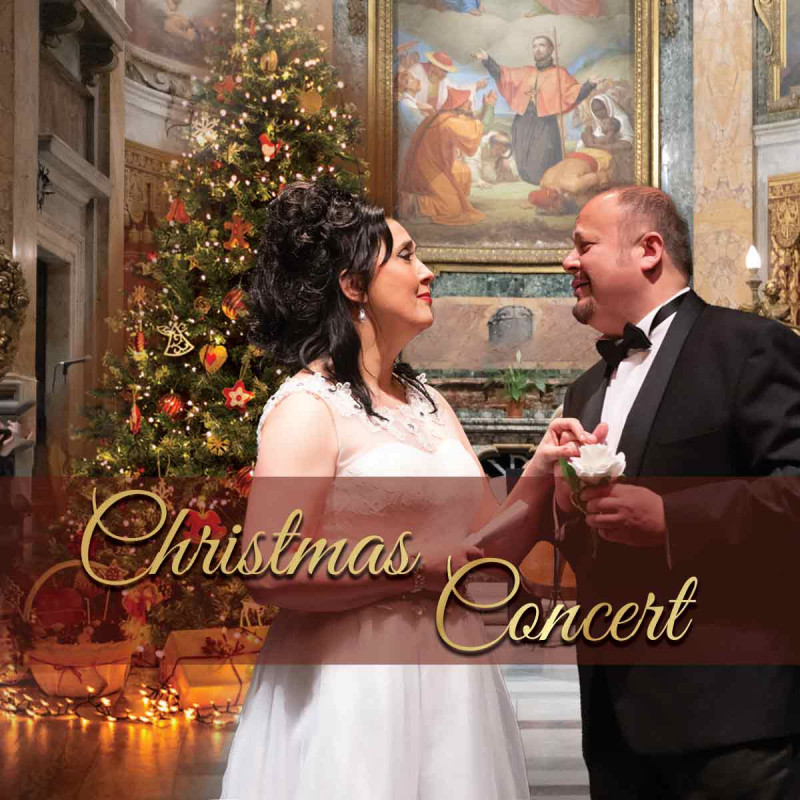 Experience the magic of Christmas and let yourself be moved by traditional Christmas songs and melodies by W. A. ​​Mozart, F. Mendelssohn and G. F. Haendel, interpreted by the superb voices of soprano Clementina Regina and tenor Emil Alekperov. We look forward to seeing you for this exciting concert in the magnificent hall of the Caravita Church in the heart of the Eternal City.

JOHN LENNON - War Is Over

She performs in concerts throughout Italy singing also at the Italian Parlament with the Orchestra Napoletana directed by M° Luigi Grima. She also sang as a soloist in LA CANTATA DEI PASTORI by G. Giordano and in the STABAT MATER by G.B. Pergolesi, revised by G. Paisiello, with the Orchestra San Pietro a Majella. She won the third prize at the XV Concorso Internazionale di Musica “Città di Caserta - Belvedere di San Leucio” and a scholarship during the “European Opera Day” (2014). She debuted in the role of Adina in L’ELISIR D’AMORE by G. Donizetti at Teatro Bellini of Naples with the Orchestra Corallium directed by M° Luigi Grima.

He graduated at the “Academy of Lyric Art” in Osimo studying with the famous teachers S. Segalini, M. Melani, R. Kabaivanska, E. Ferrari and A. Juvarra. He participated in the International Festival “Valle d’Itria” in Martinafranca for three consecutive editions acquiring his first theatrical experience, performing in various operas, including “Macbeth” of G. Verdi, “The Last Day of Pompei” of G. Pacini and the “King” of U. Giordano. He performed in the operas: “Don Giovanni” and “The Magic Flute” by Mozart, “The Barber of Seville” and “La Cenerentola” by Rossini, “Don Pasquale” and “Elisir d’amore” by Donizetti, “Falstaff” and “La Traviata” by G. Verdi, “Pagliacci” by R. Leoncavallo. From 2001 to 2011 he was a member of the “Society of Italian Operetta”. From 2010 Emil started performing in Argentina, Paraguay, Colombia, Ecuador and other countries.

- *E-Tickets: your order confirmation email it's your ticket. No need to print it, just show it from your phone at the entrance to the concert!

- *Refundable tickets: all tickets are completely refundable until 48 h before the beginning of the concert. You just need to send an e-mail at info@operaelirica.com and ask for the instantaneous refund.

- Roma Pass 10 Euros Discount: buy a 20 euro Back Seat ticket, show your Roma Pass card at the entrance and get a Central Seat (whose value is 30 euros).

- Covid masks are not mandatory.

We suggest to arrive thirty minutes before opening in order to get the best seats.

Comments (2)
Grade
No customer reviews for the moment.

Your review appreciation cannot be sent

Are you sure that you want to report this comment?

Your report has been submitted and will be considered by a moderator.

Your report cannot be sent

Your comment has been submitted and will be available once approved by a moderator.

Your review cannot be sent

Customers who bought this product: